An upright dense to sparse shrub that grows to 2 metres tall, usually with a narrow habit. Its northern extent in NSW is around Gulgong, Merriwa and Mudgee, then extending south through Lithgow, into the Sydney basin and Blue Mountains and Southern Highlands, extending south into the South Coast and Southern Tablelands and Western Slopes, though Victoria and into South Australia. It is widespread in heath and woodland in well-drained sandy soil as well as swampy areas. It has smooth bark that is can be shed in stringy strips. Leaves are narrow-ovate to ovate, to 15 mm long and to 4 mm wide with a sharp point on the end and somewhat concave in cross-section, mid-green. In this species flowers are usually borne singularly on new growth, to 12 mm in diameter, with white or occasionally pink-flushed petals, occurring from Spring to Summer.

Leptospermum – derived from the Greek words leptos meaning ‘fine’ or ‘slender’  and sperma which means ‘seed’ referring to the thin brown seeds of the genus. Continentale – refers to the interstate distribution of the species on the Australian mainland, in contrast to other species which have more limited distributions.

Many Leptospermum species have an ability to regenerate vegetatively after fire with suckering basal growth and branch-shoots. They will also regenerate by seed. The general common name, Teatree, derives from the practice of early Australian settlers who soaked the leaves of several species in boiling water to make a herbal tea. Aborigines used the wood for spears, pegs. Bark used for fire.

Propagation and maintenance notes:
The plant is best grown in damp, loam or sandy soils and positioned in full to partial sun. It has some degree of salt tolerance.

SEEDS: Enough for you to successfully grow between 100-200 plants. Your seeds are of the same stock we use to grow our native plants in the nursery. The success of germination varies with open-pollinated, wild-collected seeds and after 3 years of consistently growing these species in the local area, I have selected the amount of seed you need to successfully grow between 50-100 plants yourself. These seeds are collected seasonally and with sincere cultural and ecological respect. Ordering a quantity according to this scale rather than ordering individual seeds is a better representation of sustainable seed harvesting and success for the grower. 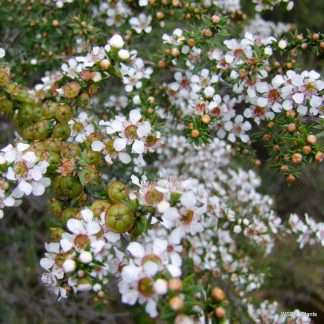