Moonah is a long-lived dominant feature of limestone soils growing at the back of sand dunes and on the coastal cliff tops. Along our coastline it is often seen growing interchangeably with coastal heath. Whilst heathland species dominant the poorer, sandy or shallow soils, Moonah dominates the limestone clays (marl) that in places forms an ‘enchanted’ Coastal Woodland. Its ability to withstand frontline coastal winds, poor soils, tolerant of long, dry summer conditions, and produce a high abundance of nectar for birds when it flowers in summer underscores its role as an ecologically keystone species along cliff tops. Its form can vary from a stunted low-growing shrub that is less than a metre high in exposed conditions to a tree up to 20m in height when conditions are suitable.
Foliage is alternately arranged on branches and the leaves are small, linear and narrowly elliptic.
Highly perfumed flowers are formed in a bottle-brush arrangement on new growth and are white. They are an important source of food for a range of birds, animals and insects during summer when most other things have finished flowering.
Seed capsules are retained on older branches.

Indigenous uses as provided by the Wathaurung Aboriginal Corporation: A sacred plant to Wadawurrung women. It has mythological and ceremonial importance.

SEEDS: Enough for you to successfully grow between 50-100 plants. Your seeds are of the same stock we use to grow our native plants in the nursery. The success of germination varies with open-pollinated, wild-collected seeds and after 3 years of consistently growing these species in the local area, I have selected the amount of seed you need to successfully grow between 50-100 plants yourself. These seeds are collected seasonally and with sincere cultural and ecological respect. Ordering a quantity according to this scale rather than ordering individual seeds is a better representation of sustainable seed harvesting and success for the grower. 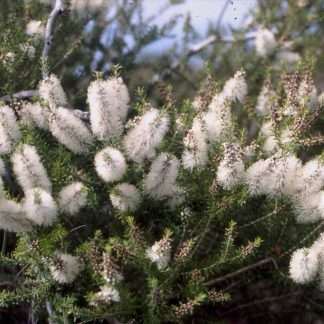