YACON PLANT:
A plant native to Peru, South America, it has been grown for thousands of years for it’s edible sweet tubers, which are best eaten raw or used in cooking or savory.

GROWING METHOD:
Yacon is an annual/perennial. It is easy to grow in most soils with reasonable rainfall or watering and moderate heat. The plant thrives anywhere and forms its tubers in autumn. The plant grows 1.5 to 2 metres tall and produces attractive small sunflower-like flowers.
Once the plant dies back in winter, it can be dug up and separated into the reddish colored rhizomes (kept for planting the following season) – and the large brown tubers which can be eaten raw or cooked. The tubers have a crunchy texture like apple and a unique flavor (a cross between apple, cucumber and watermelon).

Store the collected rhizomes in a cool dark location in moistened peat moss so they don’t dry out. Come Spring, the rhizomes are planted out around 3-5cm below the soil. The rhizomes multiply easily and can be separated each year to increase plant numbers. Suitable for growing in nearly all climates. They are frost sensitive so plant out only after the last expected frost or plant under shelter until frosts are over. Plants take approximately 6-7 months from planting to maturity. 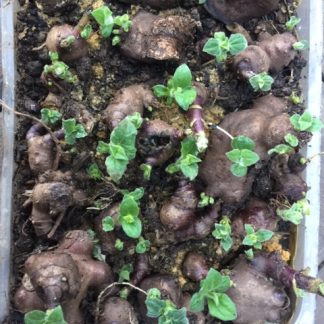