Pls play this YouTube 1st by copy and paste onto Google!

* Jicama is a native Mexican vine that is usually grown as an annual, somewhat like a sweet potato plant but its tuber looks more like a turnip.
* It has a variety of common names, including climbing yam bean; Mexican potato; Mexican Water Chestnut; Mexican turnip; Mangkuang or Sengkuang (Malaysia); 沙葛 (Chinese); Kuzuimo (Japan); Sinkamas (Filipino); Mankaeo (Thai); Sankalu (Hindi).
* Jicama can be eaten raw in or as part of salads. They can be steamed, baked, boiled, mashed, fried or stir fried in much the same way as potatoes.  It easily absorbs flavour from other ingredients it is cooked with and retains its firm texture.  Its mild taste makes jicama very versatile and it mixes well with many foods including salads, salsas, souffles, dips, slaw, meat dishes, salmon dishes.
*  Due to its high price in Australia (at times varying from $12 to $20/kg depending on the season) it is only used in expensive Chinese restaurants in spring-rolls, or as a substitute for (even more expensive fresh water chestnuts) especially in sweet and sour dishes.

* They can be grown from tubers or seeds (which are most common) usually in spring. As seeds have a hard coating it helps germination if they are soaked in warm water overnight before planting. Sow seeds 1cm deep and pat the soil down firmly over the seeds to keep them moist. Water them regularly until they are at least 8cm tall. As they grow pinch off any flowers to prevent pods forming and to put most growth into the tubers. Jicama grows quickly, so keep soil moist and feed regularly with a continuous-release plant food. Harvest jicama approximately 150 days after planting.  Tubers weigh from 250gm up to 2.5kg. After harvesting allow the tubers to dry fully before storing in a cool dry location.
* All parts of the jicama plant above ground (e.g. vines, stems, flowers and seed pods) are poisonous and therefore not edible.  The seed pods and seeds contain rotenone, a toxic substance which is used as an organic insecticide. 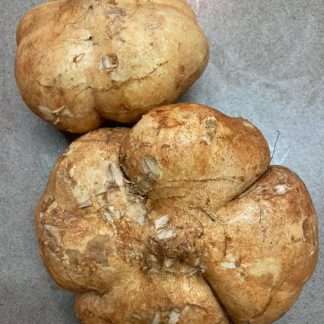